The fire inside Review 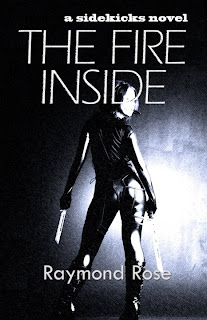 The fire inside by Raymond Rose
What's it about?
The Fire Inside: Jack’s life isn’t the most exciting but it’s a life. One that he’s created over the past ten years to suit him. That is, until Bruce, Jack’s best friend comes to town. Bruce, a Federal Agent, is on an uber-secret mission to save the city. Instead, he’s murdered. Suddenly, Jack has no choice but to become what he was before: a crime-fighter.

Ten years ago, Jack and Bruce were Teen Protectors, costumed crime-fighters under the tutelage of their mentors, The Protectors. One night, a horrible battle erupted between superheroes and villains that left half of the city ruined and thousands dead. The government banned all superpowers and Jack, presumed dead, remained that way.

However, now, Bruce is dead and Jack sets out to solve his best friend’s murder. With the help of new allies (including a man who can turn invisible and a woman who can become pure information), villains old and new (including his ex-girlfriend) bent to stop him, Jack will walk a world he left – a world more complicated and dangerous than he ever knew – and find some answers.


My review:
4/5
To say this book is a thriller or fantasy would be misleading, it has elements of thriller and fantasy, along with sci-fi, mystery, action and even comic book (without the pictures lol)
I admit I was a bit wary starting this book because there were elements to it that just aren't my 'thing.' But I'm glad I read it anyway! It took me a while to get into, it was past halfway before I found myself not wanting to put it down to go to bed at a reasonable time! And I enjoyed trying to solve the mystery as I read.
The book is packed full of action and was rich with lots of details of both the scenery and background info every time we met someone new.
However there are a lot of characters to meet in the book and I found myself getting a bit confused at times, so I was pretty proud of myself when I guessed the bad guy before he was revealed lol
Out of all the characters I felt myself caring about Jack, or Sparks, the most. The title 'The fire inside' is really apt for him and I felt him go through a journey throughout the book and he steps up when he has to. I just loved the final scene where we see, not just a team but a family come together.
I'm not sure if there will be a follow up to this, but I'd happily read one if there were because I enjoyed it a lot.
For more info on this and Raymond's other books you can use either of these links: http://christopherwilliamsbooks.com/blog/2010/10/12/the-fire-inside/
http://raymondmrose.tumblr.com/TheFireInside

Email ThisBlogThis!Share to TwitterShare to FacebookShare to Pinterest
Tags: raymond rose, review, sidekicks, the fire inside