Art of the ninja: Earth review 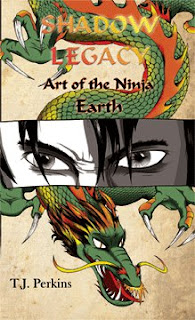 Art of the Ninja: Earth by T.J Perkins
What's it about?
Growing up ninja in a modern world with ancient customs is difficult, but the Japanese government still has need of them. Training in the Chaio village, home of the best ninja, Duncan Kimura dreams of one day being chosen for the elite special forces–the Black Dragon Squad. But his dreams won’t become a reality if he can’t control his destructive rage that threatens everyone around him.
Turmoil threatens to tip Duncan’s balanced world; rivalries, disputes with other teens, competition, and a beautiful kunoichi–a female ninja. The plague of emotions fuels his anger and an entity hidden deep inside him threatens to surface–it wants out.
The Chaio ninja are guardians of secret ancient artifacts that are of great interest to a mysterious foreigner who employs the help of a rival clan, the Shimoshuki, to steal them.
Only one ninja–a kunoichi–takes the mission, and she wants Duncan’s power for her own. She infiltrates the Chaio village alone and secretly threatens everyone close to Duncan. If he tells anyone about her, she vows to kill them. In return she wants his power and the secrets of the Chaio village.
Faced with a foe unlike any other, Duncan must overcome his own fears and the raging anger bursting within him when she kidnaps his girlfriend with plans to kill her. Follow him through his trials and challenges as he will either lose himself to his rage and become a threat to all he knows and loves, or triumph and become the ninja his people expect of him.

My review:
3/5
After reading and enjoying a couple of T.J Perkins children's books I was her new adult book would be like. I wasn't disappointed, since I know nothing about ninjas I was a bit worried about a reading a story about them, I admit there were a few words I didnt understand and had to figure out myself, like gi and sensei but the breezy writing and big air of mystery made it easy to get into and I finished up the book in a day.
I have to say though I didn't quite feel it had the tone of an adult book and at some points felt like I was reading a book for younger readers, not that this is a bad thing, I just think it leans more towards ya and would make a great gift for teenage boys (I'll certainly be holding onto it for mine) but I wouldn't let anyone younger than that read it due to some violent scenes.
I liked the heroic main character of Duncan and felt all the characters were explained really well so I knew who they were and what they were like, his romance with mayumi is sweet, if a little underdeveloped, would be great to see how they become closer in further books and I'm also very interested to see what happens next with Duncan and his abilities.

Email ThisBlogThis!Share to TwitterShare to FacebookShare to Pinterest
Tags: art of the ninja, review, tj perkins