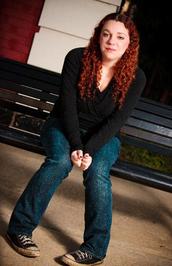 Have you got any tips for aspiring writers?

Everyone’s writing process is different. The great thing about writing is that there are no limits when it comes to ideas or experimentation. However, there are a few simple ways to make your writing stronger:
1.       Show, don’t tell. This is a basic idea, but it can be harder than it looks. Readers don’t want you to spell everything out about what a character is feeling—they want to experience it from the way a character behaves or what they say. If a girl is beautiful, don’t tell me she’s beautiful—describe what makes her beautiful so I can believe it.

2.       Don’t be afraid of the word “said”. Sometimes it’s good to use more descriptive words, but you’ll find that your dialogue goes much smoother without interjecting it with “she cried” or “she yelled” or “she announced” every other line.

3.       Character voice. Think of two friends you have, or two family members. Do they speak the same way? Probably not. Everyone has their own voice and mannerisms and sense of humor (or lack of!). Trying to differentiate your character voices in dialogue so they don’t all sound alike can do wonders for your character development.

4.       Read! A great way to learn about writing is to read the works of other writers you love. Read your favorite novels and try to think about why it is you love them so much. Is it the descriptions, the plots, the characters, the writing style? You can then try to apply what you love about other people’s writing to your own.

5.       Write every day, no matter what. Even if you feel you have nothing to say. Even if it’s just a sentence or two. The only way to become a better writer is to write, write, write!

Do you ever base your characters on people you know in real life?

I don’t base any of them on specific people. Certain dynamics I’ve had with family and friends sometimes inform the way my characters interact with each other. But whenever my family or friends plan to read, I have to reassure them that no, it’s not based on them! My sister still hasn’t read Saving June—I think she’s worried it’s about her, when it really isn’t! 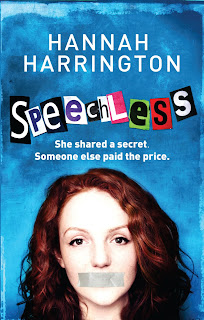 Speechless
Everyone knows that Chelsea Knot can’t keep a secret

Until now. Because the last secret she shared turned her into a social outcast—and nearly got someone killed.

Now Chelsea has taken a vow of silence—to learn to keep her mouth shut, and to stop hurting anyone else. And if she thinks keeping secrets is hard, not speaking up when she’s ignored, ridiculed and even attacked is worse.

But there’s strength in silence, and in the new friends who are, shockingly, coming her way—people she never noticed before; a boy she might even fall for. If only her new friends can forgive what she’s done. If only she can forgive herself.

Hannah Harrington is a 25-year-old born and bred Michigander. She grew up in the town of East Grand Rapids before later moving to the Lansing area, where she currently resides with three cats and a black labrador, all of whom are named after famous musicians.

She wrote her first book at age nine, a stunning, forty-page Call of the Wild/Black Beauty ripoff ode to her dead dog. She later attempted her second at fourteen (by longhand), but failed miserably. She got the idea for Saving June during the summer after high school, while living out of her car and working as a pizza cook. It wasn't until she was twenty-one that she decided to write a story around the scenes she'd scribbled into a notebook years before.

Saving June, Hannah's first novel, was published by Harlequin Teen in 2011. Her next novel, Speechless, will be released in the US on August 28th, 2012.

When she isn't busy writing like a crazy person, Hannah enjoys horseback riding, arguing about politics, watching documentaries, playing guitar (very badly), and speaking about herself in the third person.