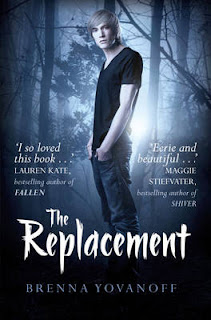 The Replacement by Brenna Yovanoff


What's it about?
Mackie Doyle is a replacement - a fairy child left in the crib of a human baby sixteen years ago, to replace the baby when it was stolen away by the fey. So though he lives in the small town of Gentry, Mackie's real home is the fey world of tunnels and black, murky water, a world of living dead girls ruled by a little tattooed princess. Now, because his fey blood gives him fatal allergies to iron, blood and consecrated ground, Mackie is slowly dying in the human world. Mackie would give anything just to be normal, to live quietly amongst humans, practice his bass guitar and spend time with his crush, Tate. But when Tate's baby sister goes missing, Mackie is drawn irrevocably back home to the fey underworld of Gentry, known as Mayhem, where he must face down the dark creatures, rescue the child, and find his rightful place - in our world, or theirs.

I finished this book still not knowing how I felt about it, I had to sleep on my review to really think about it.
I felt extremely frustrated at the start because there wasn't any 'world building.' it jumps straight in and I was very confused with exactly what was happening sometimes, like I'd accidentally missed a chapter, it was only after that I realised this was to echo the towns reluctance to talk about or acknowledge the strange goings on in the night.
I also struggled with the main character mackie, instead of dark and brooding, I thought he went to far and became dreary and depressing, a few times when I put this book down I actually felt down myself, but I have to credit some of that to pregnancy hormones heightening my emotions, which I think gave me a stronger reaction than someone else.
It wasn't until well in that I felt the eerie sense of the book and could read easier and I can honestly say I've never read anything like it before, there's no holding back on the gruesome parts and the monsters really are scary to think of.
I really felt mackie redeem himself in the end in a scene that almost had me in tears and by the end I really feel like I hope everything works out for him.
So to conclude I guess I'd say maybe don't read if your pregnant but certainly give it a shot if you like a challenge in your reading and don't give up after a few pages of confusion.
For more on Brenna Yovanoff visit her website: http://www.brennayovanoff.com/
Buy the book here (UK)
Posted by Tipsy Misty at 11:11 am