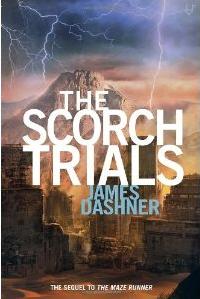 The scorch trials by James Dashner
What’s it about?
Solving the maze was supposed to be the end. No more puzzles. No more variables. And no more running. Thomas was sure that escape meant he and the gladers would get their lives back. But no one really knew what sort of life they were going back to. In the maze, life was easy. They had food, and shelter, and safety... until Theresa triggered the end. In the world outside the maze, however, the end was triggered long ago. Burned by sun flares and baked by a new, brutal climate, the earth is a wasteland. Government has disintegrated – and with it, order – and now Cranks, people covered in festering wounds and driven to murderous insanity by the infectious disease known as the Flare, roam the crumbling cities hunting for their next victim... and meal. The Gladers are far from done running. Instead of freedom, they find themselves faced with another trial. They must cross the Scorch, the most burned-out section of the world, and arrive at a safe haven in two weeks. And WICKED has made sure to adjust the variables and stack the odds against them. Thomas can only wonder – does he hold the secret of freedom somewhere in his mind? Or will he forever be at the mercy of WICKED?
My review:
5/5
‘The maze was only the beginning’ never have I read a truer tag line! The scorch trials was an amazing follow up to the brilliant The Maze runner. Our boys are thrown into the action right from page one and it doesn’t stop until the very end as they all battle to make it through the scorch trials. I love Thomas and think he makes a great and very brave hero, he’s loyal to his friends all the way through and always tries to do what he thinks is the right thing, and his budding romance with Theresa is just lovely to read. There are a lot of unseen twists to the plot and, like Thomas, I found myself questioning who I should really be trusting and of course what the hell will happen next! Because you really never know in this series, that’s why I’m on the edge of my seat awaiting the third book, The death cure.
For more from James Dashner visit his website: http://www.jamesdashner.com/
Buy the book here (UK)
Posted by Tipsy Misty at 10:29 pm