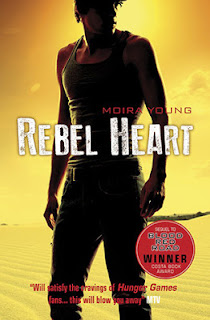 What's it about?
Saba has rescued her kidnapped brother and defeated the fanatical Tonton. But the price to be paid for her violent victory is terible. Jack has disappeared – and can no longer be trusted. A new and formidable enemy is on the rise in the dustlands. No one is safe. And Saba must confront the terrible secret hidden in the darkest depths of her soul.

Other books in the series (Link to my review)
Blood red road - Book one.
My review

Rebel heart is every bit the enjoyable thrill ride as book one Blood red road. It's full of twists and turns as the gang takes on another quest.
I really enjoyed Rebel heart as much as I did the first book and its left me excited for book three which isn't out until 2014!
After the ending of Blood red road I was anxious (spoiler if you haven't read book one.) to see Saba and Jack reunited and live happily ever after, which of course wasn't going to happen because then the book would've been boring! But all the way through I was rooting for them to be back together and keeping my eyes peeled for sexy Jack to make an appearance.
This does have some similarities to the first book, Saba sets off to do something, her friends insist on following when she tells them not to and she gets sidetracked a lot along the way, but don't be fooled, its still very different from the first too and has a life of its own.
Despite this being a middle book, I was never bored, in fact I read it quicker than book one, probably because I read it straight after so I was used to the way it was written which I struggled with at the start of Blood red road.
It was full of surprises, one I really didn't expect and not sure I got but hopefully will make more sense later on along with other parts of the story that developed.
This is a definite must for fans of book one and with another tough ending, it'll leave you begging for book three!

My thoughts on the cover
Its not often we get YA covers with guys on, especially sexy guys like this one, so of course, I love it! lol I do like the yellow colour too and the way it fits in with the cover of the first book so they match quite nicely.

'What happens to you changes you. Fer good or ill, yer changed ferever. There ain't no goin back. No matter how many tears you cry. It sounds simple, but it ain't.'


'I'd almost fergot how it feels to be kissed by Jack. To be touched by him. To be held by him. The fierceness of it. The tenderness. The tinglin all over my body, like lightnin's about to strike me. How we fit together, chest to chest, thigh to thigh. Like we was made fer each other.'