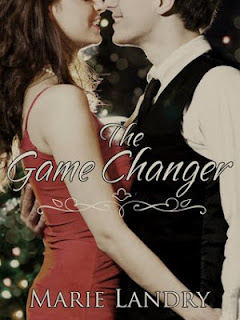 
Melody Cartwright has never had a problem with change, but for the first time in her life the changes are beyond her control—she suddenly has a niece she never knew, but has to prove herself to; her best friend is making huge life changes of her own; and she has to deal with her ex and his crazy new girlfriend who has stalker tendencies.
When Melody meets confident, sexy Julian, she’s not interested in a relationship. He tells her it’s possible for a man and a woman to just be friends, and despite his ultra-charming ways there’s something about him that makes Melody believe he could be right.
During a time of change and turmoil, it doesn’t take long for Julian to become everything Melody never knew she needed in her life. But is it possible for them to remain ‘just friends’ or will Melody be a game changer for Julian the playboy?

Unfortunately I have to start by saying that I didn't enjoy The game changer as much as I enjoyed the authors debut novel Blue sky days. Everyone was just too nice for me and I guess I was just hoping for some more grit or passion, while I do enjoy some contemporary my personal tastes stretch to things with a darker side or sarcastic humour.
I did like the idea of The game changer though, the thought that there's someone out there who could change everything for you, whether you want them to or not, it was an interesting premise and a nice setting for a love story.
The story all comes together neatly and I liked watching Melody and Julian's relationship develop even though it drove me crazy when they kept talking about being friends and saying 'You're such a good friend,' who were they trying to kid? lol
I think my favourite character would actually have to be Melody's frazzled best friend Olivia, she had a great personality and I liked how she could be talking about something and then suddenly flit to something else entirely.
Julian was also a nice character but I didn't feel that spark for him that I do for some male leads, like I say, everyone just felt too nice to me and it eventually got a bit too sugary for my tastes.
But I still liked it and it hasn't put me off Marie's writing in the future.

My thoughts on the cover
I really like this cover, it's really simple and does actually match the cover of Blue sky days, which is pretty cool, the red dress really stands out against the other neutral colours.

Favourite quotes
'All those thoughts fled from her mind the moment Julian emerged at the top of the stairs and flashed her a smile. Now the questions running through her mind were completely different. Had he always been this beautiful? Had the sight of him always made her heart speed up and her stomach flutter with nerves? Did he want to kiss her as badly as she wanted to kiss him?'