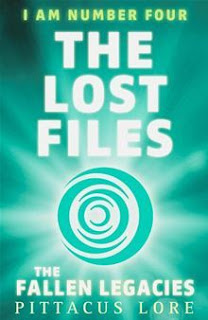 
Before Number Four, there were One, Two, and Three. Until now we've only known that the Mogadorians caught Number One in Malaysia. Number Two in England. And Number Three in Kenya. But all of that is about to change. . . .
In I Am Number Four: The Lost Files: The Fallen Legacies, you'll learn the true story behind these ill-fated members of the Garde. Before they were murdered by the Mogadorians, before Number Four was next, they were all just kids on an alien planet called Earth—discovering their powers, trying to stay hidden, and running for their lives.

The latest offering in The lost files series is actually told from the point of view of a Mogadorian! As soon as I heard that, I knew I had to read it as soon as I could get my greedy hands on it.
And The fallen legacies didn't disappoint me at all, it was great getting that insight into a Mogadorians mind, and a teenage one at that, it didn't even occur to me before that there were younger Mogs, but duh, of course there are lol.
The short story was really interesting and I actually got to like Adam, despite him being the 'enemy,' I had a feeling his story would go the way it did and I can't wait to see if he pops up in the main novels now.
It was really interesting seeing what it is Mogadorians believe about what they're doing and how they redeem it to themselves.
This one is another must for the series along with the other two short stories.

My thoughts on the cover
Well, of course it matches the others, so yay, I'm also in love with the colour!

Favourite quote
I am Adamus Sutekh, son of the great general Andrakkus Sutekh. I am a Mogadorian. I am what they should be afraid of.