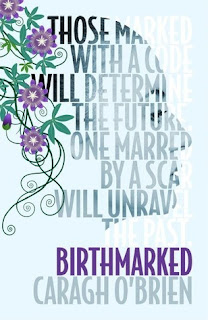 Birthmarked by Caragh O'Brien.
Available now.
http://www.simonandschuster.co.uk/
What's it about?
In the Enclave, your scars set you apart, and the newly born will change the future.

In the future, in a world baked dry by the harsh sun, there are those who live inside the walled Enclave and those, like sixteen-year-old Gaia Stone, who live outside. Following in her mother's footsteps Gaia has become a midwife, delivering babies in the world outside the wall and handing a quota over to be "advanced" into the privileged society of the Enclave. Gaia has always believed this is her duty, until the night her mother and father are arrested by the very people they so loyally serve. Now Gaia is forced to question everything she has been taught, but her choice is simple: enter the world of the Enclave to rescue her parents, or die trying.
My review:
5/5
I bought this book when it came out and then it sat on my shelf for a long time, I'm so glad that I finally got to reading it though as I really enjoyed it. It's quick to get into the story and give you an insight into the world our characters are living in. Whilst I did feel that some parts moved slower than other parts I found I wasn't bothered because the author was just taking her time to tell the story properly instead of rushing to make for a more complete book. It was wrapped together well but I have to say I was a little disappointed she went for the obvious cliffhanger ending after such a great and different book.
I liked the main character Gaia, she goes through some terrible things and still comes out strong in the end, once she realises perhaps she should be asking questions aout her world, she does and she doesn't stop, she persists and fights for what she believes is right. Society has convinced her she's ugly because she's scarred and I hoped she's shake that off eventually but she never which I guess I found a little sad but she's still a strong heroine.
Sgt. Grey I had a harder time getting a grip on because his first impression is different to his second and third, he changes a lot even going onto the end and I really didn't feel like I knew him by the time the book was finished.
The book itself is a great story with some truly shocking scenes and other parts that had me on the edge of my seat wondering what would happen. There were a couple of times when I got a little confused by the science of the stories backgroud and there's no real explanation for how the world has ended up as it is but I wasn't left dissastisfied, in fact I was eager for the next book.

My thoughts on the cover
I really like this cover, is so different and intriguing, the colours are nice to and I like the flowers, it's defintiely a win for me. 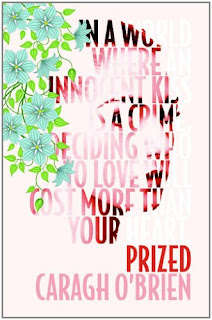 What's it about?
Striking out into the wasteland with nothing but her baby sister, a handful of supplies, and a rumor to guide her, sixteen-year-old midwife Gaia Stone survives only to be captured by the people of Sylum, a dystopian society where women rule the men who drastically outnumber them, and a kiss is a crime. In order to see her sister again, Gaia must submit to their strict social code, but how can she deny her sense of justice, her curiosity, and everything in her heart that makes her whole?

My review:
4/5
Warning - slightly spoiler-ish.
I really enjoyed Birthmarked so I was glad I had the sequel to start right away and I really liked it as much as the first one, however I did have some issues with it. I'll start with what I liked, once again Caragh O'Brien has written a great story that's compelling, thought provoking and had some 'gasp' worthy moments, it all tied in together well and I can see how the two worlds built up in this and the first book will clash in the third (and final?) book, which I am really excited for. Gaia goes above and beyond to make a stand for her beliefs and it makes for a semi-surprising ending. However I had trouble yet again with Leon, when he does come back he's a completely different person and I can see why he is and why he's angry but it felt like he changed almost overnight again but nothing had really been resolved to warrent the change, never the less, whilst a little confused it certainly didn't make me put down the book. The author did another great job at setting up an opressive society, that believes in the drastic laws they have made, without it feeling just like book one and I loved the role reversal of the women in charge!
And of course with a new society comes new characters, though I don't have a firm favourite amongst them I did find myself quite partial to Will and hope he'll be appearing more in the next one 'Promised' which, as I've mentioned, I am really excited for!

My thoughts on the cover
Well I loved the first and this is the same style so of course I love this cover to, I really like the colours on this one and the fact that Gaias head isn't turned rather than a profile this time, I think it represents her getting stronger as she battles for what she believes in and comes to terms with her scarred face. I predict the third cover will be her from the front :)

Gaia came to a stop, staring at him, at his black beard and the distinct lines of his nose and eyebrows, disbelieving. It can't be.
Two things were clear from his proud stance: he agreed to play, and he despised them all.
Check out Caragh O'Briens:
Website/Blog
Facebook
Twitter