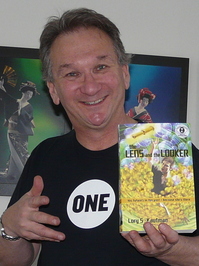 I’ve been continually flattered of late by people telling me they believe my History Camp concept is quite original and asking me where the idea came from. The first History Camp novel, entitled The Lens and the Looker is about an almost Utopian 24th century world where kids are taught not to repeat the mistakes of the past by being forced to live in recreations of cities from Earth’s distant past. There they must experience the hard lives of our ancestors, so they will appreciate their modern civilization. Some unappreciative “hardcases” then find themselves sent back in time to experience the real thing.

Where did this come from? What I brought to the table was my experience in the Green political movement. But there’s also all the visionary books which molded my thinking since I was young. I’ve written a list below and include, not just my SF/Fantasy faves, but some of my general fiction heroes. I believe it’s really important to be expansive in what you read to keep growing and healthy. Here’s a very incomplete list of 20 old and new titles and authors whose work has influenced me greatly. Their order does not reflect rank. I’ve added a little blurb about each.


Young Adult Dystopian
1. Brave New World, Aldous Huxley (If it was written now, it would include gene manipulation, but this was written away before that. It set the pattern for so much that came after it.)

2. Unwind, Scott Westerfield (Not for a young, young adult. Mr. Westerfield creeped me out several times in this book. Well done, sir.)

3. The Giver, Lois Lowry (A good example of a well-written “G” rated book. Not an easy feat.)

4. The Road, Cormac McCarthy (Again, not for a young, young adult. The movie was good, the book was friggin’ fantastic. A great example of story arc and keeping the tension tight.)

6. Lord of the Flies, William Golding (The book that made me know I wanted to be a writer.)

7. The Percy Jackson Series, Rick Riordan (Middle grade but I love it and you can tell.)

8. Spin, Robert Charles Wilson (Listed as adult but with young adult characters, this shows a dystopia by nature’s hand)


Science Fiction
9. Kindred, Octavia Butler (I love time-travel with no explanation. The best use of throwing people from different times together that I’ve read)

10. Hominoid Series by Robert J. Sawyer (A great alternative universe trilogy where the humans are the bad guys for a while.)

11. Ender’s Game (and the series) by Orson Scott Card (It’s got little kids as heroes, and it works.)

12. Handmaiden’s Tale, Margret Atwood (A great mix of dystopia, but written with a general fiction tone.)

13. Stranger in a Strange Land, Robert Heinlein (The guy’s crazy and he really pushed the bounds of morality, but I couldn’t get enough of him when I was a “hard case” teen.)

14. Ringworld, Larry Niven (Mr. Niven thinks big and out of the box. In a circle, really. I loved his kooky characters.)

15. The House on the Strand, Daphne du Maurier (Time travel with drugs and written by a matronly lady. What were you doing behind closed doors, Daphne?)

17. The Old Man and the Sea, Ernest Hemingway (One of my top five.)

18. For Whom the Bell Tolls, Ernest Hemingway (My favorite book of all time. He’s the only writer I’m putting in twice. This book informs all my high adventure sequences.)

19. City of Thieves, David Benioff (One of my top five in the last 3 years. I hate this guy. He’s young, talented, written books and movies and . . . Is married to Amanda Peet. Life is good to young Mr. Benioff.)

20. The Anansi Boys, Neil Gaiman (One of my top five in the last 3 years. I love the way he writes his characters in this book. You really know what they’re thinking. This is one of the most perfectly written books of a living writer that I’ve read.)


I could have made a list of well over one hundred titles, but this will give you an idea of what I like and inform you of what you can hopefully expect if you read the first book in my new series, The Lens and the Looker. You can find out more by going to: www.history-camp.com . You can also “like” the History Camp Facebook page at:http://www.facebook.com/historycamptrilogy
Posted by Tipsy Misty at 10:21 am

Email ThisBlogThis!Share to TwitterShare to FacebookShare to Pinterest
Tags: bronze and the brimstone, guest blogger, lens and the looker, lory kaufman, verona trilogy