A chat with Ernst Dabel, author of 'Pantheons' - and giveaway

﻿﻿
﻿﻿ A chat with Ernst Dabel, author of 'Pantheons'
It was the first day of my eighth grade in Junior High School. I had just entered the building and was walking hurriedly through the hallways, trying very hard not to bump into anyone. I remember my heart was beating really fast in excitement and my hands were all sweaty as I walked into the library. The librarian was surprised to see me as I walked up to the front desk. She remembered me from last year, knew me by my first name. She asked me why was I in the library, and I asked her ‘in the nicest voice possible of course’ if I could check out a few books. The librarian looked at me as if I had grown another head, and she kindly reminded me that this was the first day of school and that I hadn’t even checked into my homeroom yet, it just wouldn’t be possible since I had not even received a library card yet for the school year. I pleaded with her to allow me to check out some books. But she was adamant that without a library card I couldn’t take out any books. So I asked her what if I stayed inside the library and read it here. She told me that was okay. I had a few minutes and quickly took a mountain of books to one of the tables and began to read voraciously. I read ten pages of a Greek myth here, put it aside, then read several pages of a Norse mythology book, looked up at the clock to see how much time I had left before I delved into Egyptian myths and so on. A few minutes later, I placed all the books back with a breaking heart and thanked the librarian for allowing me to read a little, but I promised her I’d be back again for more. She smiled, told me she knew I’d be back, and explained that I wouldn’t be allowed to check out thirty books once I had my library card. I stepped out of the library with a deep sadness in my heart. Then I hurriedly fished through my book-bag and chose one of the five fantasy books I was currently reading and began to devour the pages with my eyes hungrily as I walked to my homeroom…fast-forward to current day: Now, I’m thirty-six, and still hungry for books. As a new YA author, I find that my burning desire for hunting down stories from ancient myths, folklore, and legends are very helpful for my research on gods and monsters.

My wish for Pantheons is that it makes its way to every reader, those who are always looking for something new, challenging, and always open to new ideas.

There are many books on vampires, wizards, and werewolves out there in the YA Market. In my opinion, they are fantastic stories. Harry Potter, Twilight, Hush, Hush, and so many others have brought so many positive things into our lives. These authors are a blessing to us book readers and I applaud them. Now, meaning no disrespect, but there’s only so much you can do with vampires, wizards, and werewolves. Of course there are very talented authors who can give new perspectives on a story, but basically the rules for those three categories can only be bent so far. For Pantheons however, the story is about all the gods (Greek, Norse, Egyptian, Celt, Asian, Aztec, Finnish, Babylonian, Hindu, Native American Indian, and many others) in modern day, and the variety of powers and abilities I have to deal with for these teenaged gods are so vast and varied it’s mind-boggling, but as I mentioned early on about my first day of eighth grade I was always the first to the library and I never stopped begging the librarian to let me check out a mountain of books, so I’m the man for the job. The amount of research, which will go into this series will test the strength of my eyes in a way that I’ve never been challenged before, but the thought of it is thrilling. Think about it Zeus, Odin, Seth, Spider Grandmother, Lugh, Marduk, Quetzalcoatl, Xuan Wu, Vainamoinen, Kali, the wealth of characters teen readers can delve into are endless… 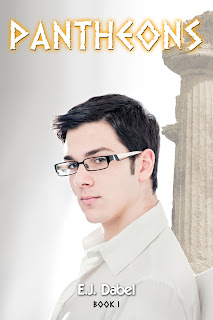 Pantheons by E.J. Dabel
Available from 14th December 2011
On the streets, they call fifteen year old orphan Isaiah Marshall the “Indestructible Diamond”. Isaiah is the leader of the “Redrovers”, a group of teenage misfits consisting of his friends Jeremy, Monty, and Pipsqueak, but when they trespass into “Kaliber Academy” to get even with the arrogant Jason Ollopa, they are in way over their heads. Principal Webb enrolls them into the High School and Isaiah soon learns about the existence of the gods of the Ancient World.
Because the gods have refused to fight the last War for fear of the Mysterious Dark, the Powers-that-Be have stripped them of their spiritual bodies and given them mortal, teenage forms. Isaiah discovers he's not only a god, but that he's the child of the Greek goddess Metis, the son destined to overthrow his cruel and sadistic father Zeus, the Darkener of the Sky, and become the greatest god in all the Pantheons. Isaiah is thrown into a world where the democratic Olympians, war-mongering Norse, Gothic Celts, firstborn Egyptians, the enlightened Hindu, the animal-like Aztecs, the martial artist Asians, the intelligent Babylonians, the great spirits of the Native American Indians, and the fierce Finnish will war against one another for the greatest of all prizes: the Dominion.

Want to win yourself an ecopy of Pantheons?
Deets
-Giveaway is international.
-Ends 15th December.
-The winner will be contacted by email so please make sure you enter with an address you check regularly.
-Just fill in the form.
-I'm hosting this giveaway so there are no follower requirements, just fill in your free entry, however following and sharing is always appriciated so there are extra entries for those if you already do or decide to follow and share :)