Yay, it's time for a giveaway!
Ok, some of you know I was already planning to give away this book but since I woke up this morning to 700 followers, let's call it my 700 followers giveaway :)
Here's what you can win 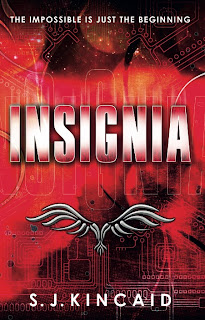 Insignia by S.J. Kincaid (
More than anything, Tom Raines wants to be important, though his shadowy life is anything but that. For years, Tom’s drifted from casino to casino with his unlucky gambler of a dad, gaming for their survival. Keeping a roof over their heads depends on a careful combination of skill, luck, con artistry, and staying invisible.
Then one day, Tom stops being invisible. Someone’s been watching his virtual-reality prowess, and he’s offered the incredible—a place at the Pentagonal Spire, an elite military academy. There, Tom’s instincts for combat will be put to the test, and if he passes, he’ll become a member of the Intrasolar Forces, helping to lead his country to victory in World War Three. Finally, he’ll be someone important: a superhuman war machine with the tech skills that every virtual-reality warrior dreams of. Life at the Spire holds everything that Tom’s always wanted—friends, the possibility of a girlfriend, and a life where his every action matters—but what will it cost him?
The prize is an ARC copy and looks like this 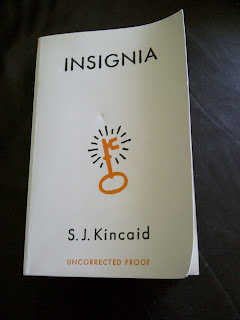 See my review HERE
(I have read it so there's a little creasing)﻿
Deets
-Open to UK and Ireland, sorry I just don't have the money for International postage for this one.
-This is a follower giveaway, so you must be a follower to enter.
-All extra entries are optional.
-Closes 27th April, the winner will be announced in this same post using the rafflecopter widget and the winner contacted via email.
-Fill in the form!