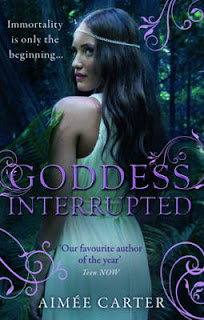 What's it about?
Kate Winters has won immortality.
But if she wants a life in the Underworld with Henry, she’ll have to fight for it.
Becoming immortal wasn’t supposed to be the easy part. Though Kate is about to be crowned Queen of the Underworld, she’s as isolated as ever. And despite her growing love for Henry, ruler of the Underworld, he’s becoming ever more distant and secretive. Then, in the midst of Kate’s coronation, Henry is abducted by the only being powerful enough to kill him: the King of the Titans.
As the other gods prepare for a war that could end them all, it is up to Kate to save Henry from the depths of Tartarus. But in order to navigate the endless caverns of the Underworld, Kate must enlist the help of the one person who is the greatest threat to her future.
Henry’s first wife, Persephone.

(4.5)
I really enjoyed The Goddess test﻿ so it's been a long anxious wait for book two in the series and needless to say I'm seriously excited when I got my hands on it.
I started off a little disappointed as it was slow to start and the characters annoyed me, though I could see Kate's point and sympathize with her she got to be a little to whiny, and I hated how down on herself she was sometimes when she kept comparing herself to Persephone. And Henry was aloof to the point of annoyance, there's protecting yourself, then there's just being plain rude. But anyway, needless to say the book did pick up, the emotions later in the boko were written so well my heart was racing and the second half of the book was just brilliant, with an explosive ending that had me screaming for the next one immediately!
I love how the author has built on the mythological set-up from book one to add more of the Greek legends so the book didn't feel the same as the first, there's more action to and some great emotional scenes.
Had it not been with my issues from the start the book would have got a full 5/5! Anyone who enjoyed the first book will love this new installment but it'll leave you dying for the next one!
My thoughts on the cover
This cover is just as nice as the first one, I really like the swirly whirly purple pattern and the girls simple dress and the thing on her head, it really has a Greek feel and sits in well with the first one.
Favourite quotes
"What I want should never dictate what you do. I want you to be happy, and so long as you are content, I will be, as well." - Henry
"You never had to fight for me to begin with. I am yours and have been from the moment I saw you." - Henry