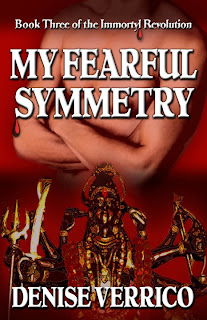 My fearful symmetry by Denise Verrico. Book three in The Immortyl Revolution.
What's it about?
A boy becomes a vampire and fights to become a man.
...Only the most gifted and beautiful Immortyls are chosen to serve Mother Kali as adepts of the ancient arts…

For nineteen-year-old Cedric MacKinnon, the promise of eternal youth and celebrity sounds like a dream come true. It becomes a nightmare when a master vampire plucks the boy from the London streets and spirits him away to India. In the fabled ashram of the adepts of the ancient arts, Cedric undergoes the grueling process of training as a temple dancer and courtesan. With the threat of revolution hanging over court, the chief elder employs the boy he names Shardul in dangerous games of seduction and intrigue. Hated by the chief’s mistress and abused by those he entertains, Cedric struggles with visions of a violent destiny that seem to come from Kali herself. The stakes are heightened when the rebel leader, Loki, is brought to India for trial and Cedric is forced to choose between the protection and patronage of a powerful elder and his love for a seductive female adept

My review:
3/5
I wanted to give this book 4/5 but because of what I felt was a bit of lull in the middle I marked it down to 3. In the middle was lots of politics and not really any action, but that's just my taste, and honestly some bits felt a little repetitive if I'm honest. HOWEVER, the rest of the book is excellent! I just wanted to get that nasty bit out of the way first. Right away I was endeared to leading man Cedric, he's funny and not afraid to say what he's thinking ever, though he's very naive and seems to just accept what's happening to him without fighting back, he's never really decided what it is he wants right down to his sexuality (he's bisexual fyi) but i loved him and was rooting for him all the way!
I was pulled into the book right away and found it hard to put down, it's beautifully written with lots of details that had me picturing the opulence of the Indian setting, though there was the quiet bit in the middle, it was very interesting to learn about the ashram of the adepts and the culture. The end was explosive and heartbreaking and I look forward to reading the next in the series, after I go back and read the first two!
﻿
My Fearful symmetry is now available to preorder on Barnes and Noble