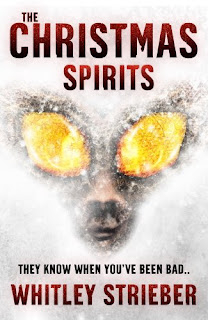 The Christmas spirits by Whitley Strieber
Available now. (Kindle only)
http://www.hodder.co.uk/
What's it about?
﻿George Moore is a modern day Scrooge, a futures trader who drives his staff hard, and won't let his assistant go home to look after her autistic son on Christmas Eve.
Like Scrooge he is mean with money, but he is also mean with his sympathies and his time. He has to swerve to avoid putting money in a charity box and also crosses the road to avoid a family he thinks are probably gypsies on his way to dinner at a cheap cafeteria. An old man sitting nearby looks as if he might be looking for the warmth of some human contact. George refuses to meet his eye and hurries home.
Various slightly odd, even disconcerting things happen. He encounters a nun who looks like an elderly child. He sees a Santa in the window of a department store, who seems to emerge from his Grotto, look confused, and is then surrounded by small elf-like figures who drag him back behind the curtains. Finally, when he arrives back in his apartment the old man from the cafeteria suddenly appears and reveals himself as George's old mentor in trading and in greed. Bill Hill reveals that he is dead and that he has come to give George a warning. He warns George he will have three visitors that night, and then in a flash he disappears.
So it comes about that, as Bill Hill said, George receives three visitors that Christmas Eve, just as Scrooge was visited by the Ghosts of Christmas Past, Present and Future. But these are not the ghosties and sprites that frightened Dickens's readers. George's visitors are more ambiguous, more frightening to a modern sensibility. They are visitors that will give even today's reader goose bumps.
They take George on an emotional journey that like Scrooge's journey - and the journey in another Christmas story, It's a Wonderful Life - teaches him the true value of Christmas, the true meaning of life and finally ... how to love. This new classic is both very scary and very Christmassy.

My review
3.5/5
Having already read Charles Dickens' A Chritsmas carol I couldn't help but compare this modern retelling with it and whilst it did stick to the theme and general storyline it did manage to hold it's own to. Whilst I did love it as much as the classic I did enjoy it and I loved the writing style, it's classic and modern at the same time. There were some parts of the story that were a little bit confusing and I felt could've been a exlained a little better but overall the story was a good one, George really is a 'Scrooge' and of course really does learn the error of his ways by the end to make for a heart warming ending.
I don't know that I found the ghosts as scary as I was expecting but there was an eerie feel to this short book that left me a little creeped out.
Overall I'd recommend this to anyone looking for a quick holiday read that's looking for a new twist on an old story.