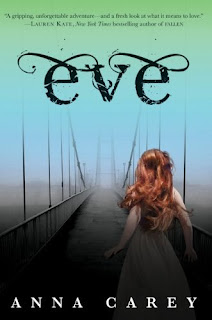 Eve by Anna Carey
Releases 5th November (UK)
4th October (US)
www.harpercollins.com
What's it about?
The year is 2032, sixteen years after a deadly virus-and the vaccine intended to protect against it-wiped-out most of the earth’s population. Wildlife has grown over once recognizable landmarks, and the New America is ruled by a controlling King who will stop at nothing to rebuild the nation. Eighteen-year-old Eve has grown up isolated from boys, and has been taught to fear them. It isn’t until the night before the graduation from her all-girls school that she discovers what really happens to new graduates. To avoid the horrifying fate that awaits her, Eve flees the only home she’s ever known. She sets of on a long, treacherous journey, searching for a place she can survive. Along the way she encounters Caleb, a rough, rebellious boy living in the wild. Eve knows she shouldn’t trust him, but he slowly wins her confidence…and her heart. He promises to protect her, but when soldiers begin hunting them, Eve must choose between true love and her life.

I try to keep all my reviews spoiler free but I just couldn't write this one without a couple of teensy ones so this is a slight spoiler warning.﻿
I really liked this book... and at the same time I kinda didn't.
Now don't get me wrong, the book is exciting, the story interesting and the characters perfectly likeable but there were little inconsistencies and bits that I felt didn't make sense that niggled in the back of my mind and slightly hindered my enjoyment of the book. Such as when they go into a house that's been flooded but there's children's drawings hanging on the fridge or when they spend all day swimming in the lake yet Caleb's knuckles are 'caked in dirt' after.
(I should add that I'm quite aware this is a proof copy that I've read and will check my review against the final released copy and change it if necessary)
Something I found hard to believe was that the girls have been brainwashed into being scared of men but at the same time they know one girls parents live together in the city and some of them remember their parents from before, surely they'd have noticed the inconsistency here.
There was also something at the end I didn't think made much sense beyond making for a dramatic cliffhanger but I can't tell you that without spoiling lol
The only other issue I had was that the world is in disarray because of a virus but there's no explanation as to where the virus came from, how long it lasted or how they stopped/cured it. When Arden gets sick it's hinted that it's the virus but then she just gets better without any kind of medical attention, how did she survive something in a dirty cave that has wiped out most the population?
I don't mean for this to sound like a bad review because it's really not, I did enjoy the book, the story caught my attention from the beginning and a lot happens meaning there's not a dull moment.
Though she's quite naive I did like Eve, she comes to be very courageous, I also liked her relationship with Caleb and how we see them actually get to know each other during the book, their feelings for one another are believeable because they do know each other.
I also enjoyed her new friendship with Arden.
There's a lot of character building in this book and we learn a lot about our charcaters pasts which made me feel like I really got to know them and cared about what happened to them in the end.
The writing itself is also easy to read I easily got into the book and finished it quickly, I'm definitely interested in giving the next book a go and hope it answers some of the questions I have.