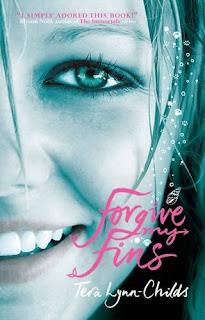 Forgive my fins by Tera Lynn Childs
Available now
www.templarco.co.uk
What's it about?
﻿
When a mermaid has her first kiss, she 'bonds' for life with the person she kisses. For Lily, a mermaid princess living in secret on land, this means she has ended up accidentally bonded to her obnoxious neighbour, instead of to the boy of her dreams. So begins a tidal wave of relationship drama, as Lily discovers that happily-ever-after never sails as smoothly as you plan it to.

My review:
5/5
Even though I figured out the end of this book by the end of the first chapter it didn't matter because it's so good! It's extremely witty and funny and I loved all of Lily's sea analogies.
Though I guessed the end I didn't guess the events leading up to it so it was a really fun read that I found hard to put down.
Lily was a lot of fun to read, she's a typically dramatic teenager who thinks shes in love with her first crush, I really wanted her to just see what was in front of her.
The book itself is so well written I found myself getting quite emotional and teared up more than once.
I have no complaints at all, the book was brilliant, I recommend it to all and I definitely consider myself Teras newest fan as soon as I've read the next book Fins are forever I'll be looking into her back catalogue!

_______________________________
Fins are forever by Tera Lynn Childs
Available April 2012
www.templarco.co.uk﻿
What's it about?
On Lily Sanderson’s eighteenth birthday she’ll become just a girl—still a mergirl, true, but signing the renunciation will ink Princess Waterlily of Thalassinia out of existence. That leaves plain old Lily living on land, dating the boy she loves, and trying to master this being-human thing once and for all.
Now that Lily and Quince are together, mer bond or not, she’s almost content to give up her place in the royal succession of Thalassinia. But just when she thinks she has everything figured out, the waves start to get rough. Lily’s father sends a certain whirlpool-stirring cousin to stay with her on land. What did Doe do to get herself exiled from Thalassinia and stuck in terraped form when everyone knows how much she hates humans? And why why why is she batting her eyelashes at Lily’s former crush, Brody?
The seafoam on the raging surf comes when a merboy from Lily’s past shows up—Tellin asks Lily for something that clouds her view of the horizon. There’s a future with Quince on land, her loyalty to the kingdom in the sea, and Lily tossing on the waves in the middle. Will she find a way to reconcile her love, her duty, and her own dreams?

My review:
5/5
I thought this was just as great as the first one, it's funny and the storyline is a little more complex. I really didn't know what decisions Lily would make, yet I was behind her whichever way she went.
I still love the original characters and I really liked Dosinia who's in this one a lot more, I laughed at her flippant nature, she acts like she doesn't care but you can tell that really she does, she was great fun.
Lily has grown up a lot from the first book which was great to see and her growing relationship with Quince is lovely.
Again the writing is great and I easily read the book quickly and stayed up past my bedtime, reluctant to put it down. I felt that the storyline all fitted together really well with no loose ends at the end.
Tera Lynn Childs is a very talented writer and I look forward to reading more by her.