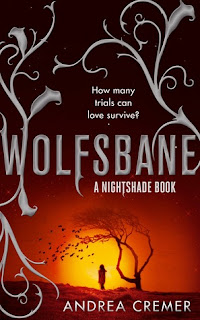 Wolfsbane by Andrea Cremer
Available now
What's it about?
When Calla Tor wakes up in the lair of the Searchers, her sworn enemies, she’s certain her days are numbered. But then the Searchers make her an offer—one that gives her the chance to destroy her former masters and save the pack—and the man—she left behind. Is Ren worth the price of her freedom? And will Shay stand by her side no matter what? Now in control of her own destiny, Calla must decide which battles are worth fighting and how many trials true love can endure and still survive.

My review:
4/5
Since this is a second book and it was one of my own I've decided to just do a quickie review instead of a full one.
Unlike a lot of 'middle' books, this one didn't feel likely was just a bridge to the next one, it's packed full of information and back story on the characters, old and new and gives a lot of insight into the story itself. That being said, there isn't much else happening, a lot of the book did feel kinda like "story-time" for the characters, I would've like to see a bit more happening in between the scenes rather than just the one big action scene at the end.
I did still enjoy the book though as much as the first one and am really looking forward to bloodrose, which I suspect is where the action will be!

My thoughts on the cover:
Honestly I don't think this cover is up to much, I like the silver pattern and the orange sunset colour but in regards to the book it doesn't really relate, I think the girl standing alone refers to Calla being alone, without her pack in this book but it just doesn't feel like anything special in my opinion.


"Are you kidding?" Connor said. "A cup of coffee instead of a ring? That's the kind of proposal I'm ready for."
"He was running at me, Monroe. Screaming like a Banshee, I swear," Ethan yelled, his voice choked and full of strain. "He yelled, 'I'm a guardian, I'm a Guardian,' over and over. What was I supposed to do?"