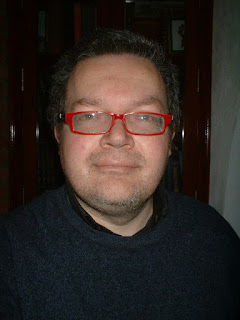 Writing "The Diviners" by Julian White.
Before I turned to horror, I'd tried my hand at writing several novels, without much caring for the results. Then I read Richard Laymon. I grew to love his tight, witty prose, snappy dialogue and warm, rounded characters (who mostly die sharp, pointy deaths.) His vampire novel, “The Stake,” is a gorgeous piece of swaggering, jangly Americana.

I became fascinated by the possibilities of the horror genre. In the hands of someone like Laymon, it mingles the everyday with the sort of extreme events that provoke equally extreme psychological reactions. There aren't a whole lot of rules, except to keep the paragraphs short and the body count high. I was sold.

My plan was to write something brisk and straightforward in Laymon's manner, but things soon got out of hand. Instead of one storyline, I ended up with four, which then had to be kneaded together somehow. I had to take time off from chasing my characters around abandoned hotels to develop a complex cosmology that would act as a backdrop. Then there was some research to do for the passages where the story backtracks to the year 868 A.D.

By this stage, I was a long way from Laymon – who could whip up a gripping tale from nothing more than a forest, some scantily-clad hikers and a stalker with a rotting animal pelt on his head – and closer to the fantastical fiction of Clive Barker and even the moody myths of H. P. Lovecraft. Or maybe I was escaping all those influences and learning, finally, to be myself.

I learnt to shock myself too. For those of you who don't know, “The Diviners” has more than its fair share of sex and violence, sometimes both at once. Whenever things got nasty, my inner censor wanted to know, “What will your auntie think? What will the world think? I'll tell you what they'll think. They'll think you're twisted beyond repair. They'll think you hate old people and pets, especially old people with pets ...”

In the end, I took a certain satisfaction in exploring the themes that most disturbed me, and in making sure that this particular horror novel didn't pull its punches. But, just to be clear, I love pets, honest.

The whole process took about a year and involved countless drafts. When I finally finished typing, half of the keys on my laptop were worn blank. I'm proud to have written a thumping, multi-stranded 130,000 word door-stopper of a book. And I really hope you like it.

Will I be writing another any time soon? 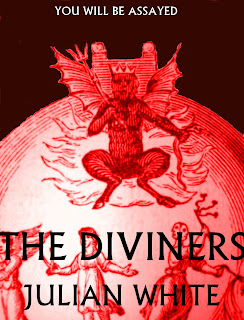 The Diviners by Julian White
Available now on Amazon Kindle.
In a seaside town, four people are plunged into a day of nightmare. A woman is haunted by a rotting body. A sparkling swimming pool hides a thousand-year-old evil. Human flesh mutates into monstrous shapes. Reality bends to reveal horrifying visions. Everything is at risk, including Creation itself.

Why? Because the Diviners' Guild are in town. Who are they? The answer takes in cannibalism, deadly maggots, reincarnated cats, body horror, psychological chills, blood magic, black farce, breakneck action, an ancient secret, a silver coin and a supernatural threat to the order of the universe.

The Diviners is the no-holds-barred fictional début by writer and critic Julian White, full of surreal scares, adult imagery and laughter in the dark. Read it if you dare.
________________________
Mist - Wow, great post, thanks Julian. I'm really looking forward to reviewing the book - hope I can stomach it! lol
Everyone don't forget to check out and 'like' The Diviners Facebook page and here's Julian's blog