Secrets of the Henna Girl - Review 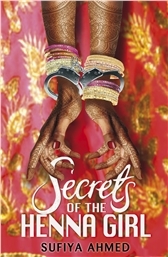 Life as Zeba knows it could be over for good . . .
Sixteen-year-old Zeba Khan has just finished school and with the summer holidays ahead, the world is her oyster: looking forward to her exam results, hanging out with her best friend Susan and dreaming of the day she'll meet her one true love. Except her parents have other plans.
In Pakistan for the summer, Zeba soon realises she’s thousands of miles from the life she left tucked away in England’s Yorkshire hills, as her future is threatened by the unthinkable - and forced - duty to protect her father's honour.
Zeba’s world is shattered, as her parents’ wish for her to marry her cousin Asif becomes clear and the wheels for their imminent engagement are set in motion. Feeling her future plans slipping through her fingers, Zeba knows that the only way to win back control of her life is to escape… but can she find a way out in time? And if so, at what cost?

Secrets of the Henna Girl was a really interesting, thought provoking and informative read, right from the first pages I started to learn about Indian culture and way of life, all of which I found really intriguing. There were really great descriptions when Zeba travels to Pakistan of the landscape and the clothes so I could visualise everything.
But, that being said, the storyline itself, whilst being different, was pretty straightforward and I didn't feel myself excited by it but I was enlightened into the differences of forced marriage and arranged marriage and am now more aware of the issue, so I'd say the message definitely got across and I think it would to teens reading this book.
It was an enjoyable, quick read that was wonderfully written with a likeable leading lady and supporting characters, both the good and the "villains."
I, of course, was on Zeba's side all the way through and had my fingers crossed she could get out of the situation she'd been put in. I enjoyed her friendship with Sehar, it was great that despite what she was going throuhg she was able to find a friend, and I liked her very wise Nannyma.

My thoughts on the cover
I do like this cover, it represents the contents of the book exactly but it generally looks to computerised, personally I think it'd have looked nicer if it were a photo of a girls hands wearing the handcuffs and bangles rather than them digitally stuck on but it's still nice and colourful.

''There, there, feel better now?' she said, and to my surprise I did. The hug was everything I'd wanted from my own mother. A reassurence that everything was going to be OK, and that I wasn't the only person in the village who didn't believe in this marriage. It felt good to know there was someone who might be on my side.'
''I am a woman, Zeba-ji. I can never win.' - Husna
Find the author
Facebook
Twitter
Goodreads
Some interesting facts:
According to the Foreign and Commonwealth Office Forced Marriage Unit (FMU):

• A forced marriage is a marriage where one or both people do not (or in the case of some people with learning or physical disabilities, cannot) consent to the marriage and pressure or abuse is used.


Statistics for January – December 2010:
• 1735 instances where the FMU have given advice or support related to a possible forced marriage. Where the age was known, the oldest victim was 73 and the youngest was 12.

• 469 cases of forced marriage, including both assistance and immigration cases, where active help was provided by the FMU.