The son of Neptune - Review 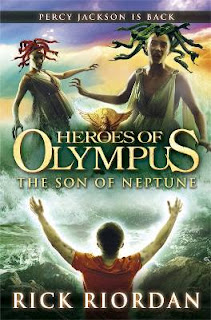 The son of Neptune by Rick Riordan
Available now.
http://www.penguin.co.uk/

Whats it about?
Seven half-bloods shall answer the call,
To storm or fire the world must fall.
An oath to keep with a final breath,
And foes bear arms to the Doors of Death.

Percy is confused. When he awoke from his long sleep, he didn't know much more than his name. His brain fuzz is lingering, even after the wolf Lupa told him he is a demigod and trained him to fight with the pen/sword in his pocket. Somehow Percy manages to make it to a camp for half-bloods, despite the fact that he has to keep killing monsters along the way. But the camp doesn't ring and bells with him. The only thing he can recall from his past is another name: Annabeth

Hazel is supposed to be dead. When she lived before, she didn't do a very good job of it. Sure, she was an obedient daughter, even when her mother was possessed by greed. But that was the problem - when the Voice took over he mother and commanded Hazel to use her "gift" for and evil purpose, Hazel couldn't say no. Now because of her mistake, the future of the world is at risk. Hazel wished she could ride away from it all on the stallion that appears in her dreams.

Frank is a klutz. His grandmother says he is descended from heroes and can be anything he wants to be, but he doesn't see it. He doesn't even know who his father is. He keeps hoping Apollo will claim him, because the only thing he is good at is archery - although not good enough to win camp war games. His bulky physique makes him feel like an ox, especially in front of Hazel, his closest friend at camp. He trusts her completely - enough to share the secret he holds close to his heart.

Beginning at the "other" camp for half-bloods and extending as far as the land beyond the gods, this breathtaking second instalment of the Heroes of Olympus series introduces new demigods, revives fearsome monsters, and features other remarkable creatures, all destined to play a part in the Prophesy of Seven.

Whilst I wouldn't call this my favourite in the Percy Jackson saga, I still loved it! I've noticed a formula with these books that's making them a little predictable for me but they're still superbly written and I just loved the infusion of Roman mythology in this one, there was some in The lost hero but there's tons in this one and the mixture of Greek and Roman mythology, and even a little Chinese has been put together seamlessly.
It was great to be reading Percy again, although the loss of memory part, although necessary to the story, was kind of annoying, we've already read the first book where Jason spent the better part of the book without his memory so it felt kind of repetative and also there were quite often things like 'Percy felt like he'd been here before' that were annoying to.
But otherwise a fabulous book, full of action and monsters, some new and some old and we meet a bunch more new characters.
And it was great to see Camp Jupiter and see how it compared to Camp Half-blood.
The other two viewpoints of the book are told from Hazel and Frank, the newest demigods to this series and they were both lovely, Hazel acted older than her years but its understandable with what she's been through and Frank was a great character to, it was lovely seeing the three embark on their quest and slowly start to trust each other with their secrets and the epic battle scene at the end was fabulous.
This is defintitly another winner in the series and I'm excited for the next book The mark of Athena, where the whole gang will be seen working together.

My thoughts on the cover
I really like the bright colours of this cover and the Gorgons are totally cool and the water being seperated by the boy, whom I guess to be Percy, is awesome, no less than Id expect from a son of Neptune!

'Looking down at the valley, Percy understood why she cared so much. Even though he was new at Camp Jupiter, he felt a fierce desire to protect the place. A safe haven where demigods could build their lives - he wanted that to be part of his future.'
'But its true. What do they call it these days - no pain, no gain? Same concept. You do the easy thing, the appealing thing, the peaceful thing, mostly it turns out sour at the end. But if you take the hard path - ah, that's how you reap the sweet rewards. Duty. Sacrifice. They mean something.' - Mars.