Return of the hungry hamster - Review 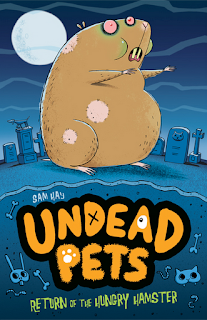 Return of the hungry hamster by Sam HayUndead pets book one
stripespublishing.co.uk

What's it about?When Joe Edmunds makes a wish on an Egyptian amulet, little does he know that he has volunteered to guide and defend the undead pet inhabitants of his town! Dumpling the hamster came to a dusty end inside a vacuum cleaner ...but he suspects that his owner Oliver's parents never admitted to their son that they were to blame for Dumpling's demise. Now the hamster needs Joe's help to reveal the truth - but there's a furry surprise awaiting them at Oliver's house...

You can probably tell that this book is aimed at a much younger audience than me but as an adult I did enjoy it as a short, guilty pleasure read.
Return of the hungry hamster was a fun read, and is actually a story unlike anything I've come across before.
It was written well, with humour I think the age group it's aimed at will find hilarious and the black and grey pictures throughout make it a perfect transition book, from picture books in to books for younger readers.
It's also not too long so it will hold an eight year olds attention and has a great, if sometimes unwilling, clever boy hero.
I'll definitely be saving this one for when my son is old enough and collecting the rest of the series.

My thoughts on the cover
I think this cover is perfect, it has the zombie hamster that somehow looks funny instead of creepy and the graveyard scene is fun too, I particularly like the cat and bunny skulls lol

'"Now wait a minute," said Joe, suddenly feeling a bit cross. Wishing for a pet was one thing, but helping zombie hamsters with their "unresolved issues" was another matter altogether!'