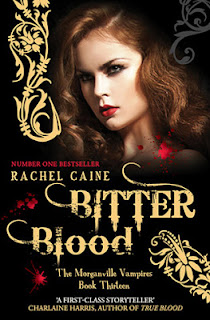 
For years, the human and vampire residents of Morganville, Texas, have managed to co-exist in peace. But now that the threat to the vampires has been defeated, the human residents are learning that the gravest danger they face is the enemy within…
Thanks to the eradication of the parasitic creatures known as the draug, the vampires of Morganville have been freed of their usual constraints. With the vampires indulging their every whim, the town’s human population is determined to hold on to their lives by taking up arms. But college student Claire Danvers isn’t about to take sides, considering she has ties to both the humans and the vampires.
To make matters worse, a television show comes to Morganville looking for ghosts, just as vampire and human politics collide. Now, Claire and her friends have to figure out how to keep the peace without ending up on the nightly news… or worse.

Once again Rachel Caine shows that a series can still be great at book thirteen! Bitter blood was every bit as good as all the previous books in the Morganville vampires series.
In this latest addition we see a new story arc developing and meet some new, interesting characters and the series is still being kept fresh.
I really enjoyed Bitter blood and I liked that Caine is continuing to tell the story from more than one point of view, about 90% of the book is told from Claire but there are parts told by Shane, Michael and - my favourite - Myrnin. It's always great getting in the heads of the other characters and seeing how they're feeling about things that are happening and their part in the story. It was particularly fun getting a glimpse into Myrnin's crazy head!
I'm enjoying where the story is going and looking forward to seeing what's coming next in book fourteen.

My thoughts on the cover
I really like this cover, just like the rest, I'm glad they're keeping up the same theme and the gold colour is really nice.


''You make me happy,' she whispered. She meant it literally - he'd just led her out of a strange, dark place and into sunlight, and the relief was so great that she felt tears in her eyes. 'So happy.''