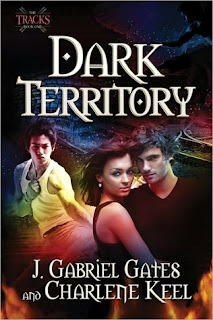 Dark territory by J. Gabriel Gates and Charlene Keel
www.hcibooks.com
What's it about?
In the quaint town of Middleburg, an abandoned train yard and old railroad tracks form the dividing line between two rival gangs—the posh, preppie Toppers and the working-class Flatliners. When Raphael, the leader of the Flatliners, falls in love with Aimee, a Topper girl, the rival gangs prepare to do battle . . . but not with guns and knives. Their martial arts training dictates a strict code of honor, which all of the gang members adhere to. The only hope for peace between the rival gangs lies within the giant X formed where the railroad tracks cross. The awesome power contained in the X sends the Flatliners and the Toppers on a mystical quest to fight against malevolent forces that threaten the existence of Middleburg—and maybe the world.﻿
My review
3/5
Well I liked this book and it has some great characters but it's really long, I felt it would've been just as good if it were missing a few scenes.
There are a lot of characters to meet in the book but I liked how they all became linked to each other by the end and there are a couple who weren't in it much that I think will be more prominent later in the series.
Though this isn't the first book I've read with martial arts in I thought it added something different to a great story, I really liked the rivalry between the Toppers and the Flatliners (Team Flatliners! lol) and I loved how when we got to the Supernatural element of the story it blended in so well with the Natural part it was believeable, though there were some parts that didn't make a lot of sense and I was left with a lot of questions, but I assume this is because there are further books and all will be explained later.
I felt the authors did a great job of portraying Raph and Aimees feelings for each other, especially when they were together, I found to hard to believe they are in love simply because they don't spend more than five minutes together a handful of times, they don't actually get to know each other making it feel more like lust or infactuation, but it was still engrossing to read them.
I thought Raph was a really great guy, honest and determined and despite his living situation he still stays true to who he is, I did feel sorry for him a lot at times and just hope everything works out for him. Aimee is a nice girl to, she's obviously getting over something big and I think she could be a lot more if she didn't have such a controlling Dad and Brother.
I think the story was very imaginative and not something I've seen before, the writing is brilliant with just the right amount of description on everything so you can easily imagine the world it made it easy to read through at the more drawn out parts, I'll definitely read the second book.

Books in The Tracks series:
Dark territory
Ghost crown (January 2012)
More by J. Gabriel Gates:
The sleepwalkers - Check out my review for this creepy horror