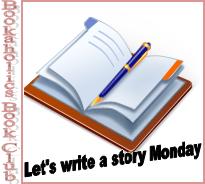 'Let's write a story Monday' was an idea I came up with last week where we all write a story together.
Basically I started off a story with a title and a few lines and asked you what you thought should come next. Then from the entries I would pick one to continue the story and post it this week and so on each week. Every few months I'll start a new story to keep it fresh and so you won't have loads to read if your new to the game.
And as a bonus, whoevers entry I pick each week will get themselves a free bookmark from me. You can pick whichever one you want from bookdepository.com or if you live in the UK you can also choose from Amazons selection of bookmarks, so long as it's sold by Amazon and not a third party so the postage is free lol
So here's the story so far.
Whirlwind.
(ME) Jerold knew he was good looking with his toned biceps and sexy dark eyes and he always knew he'd be famous, it was his destiny. Though he never imagined what it was that actually made him famous. He thought he'd be a rock star, trashing hotel rooms and having a different groupie every night or a sought after movie star living in the Hollywood hills. Maybe even a hunky model, but not this...
(Casey Mattingly) Jerold stood in shock, looking at his father one final time as the officer threw him into the squad car. It was hard to believe that most of his life had been a lie. Just a cover up for his dad's insane ideas and theory's of "Another Dimension". Now he was the laughing stock of the town and would be refered to as "The Mad Scientist's Minion". He wanted scream. To yell at his dad and tell him how his life was now ruined. But he couldn't. All he could do was stand there and watch as the final strobe light dissapeared into the darkness....
Thanks Casey for your entry, please send me an email with your address and a link to your choice of bookmark.
If you'd like to play this week just use the form below, remember it can be anything as long as it's continuous to the story.
The form is open until Sunday so you can send your entry anyday, not just Monday lol

Email ThisBlogThis!Share to TwitterShare to FacebookShare to Pinterest
Tags: lets write a story