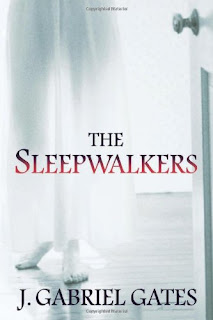 The Sleepwalkers by J. Gabriel Gates.
Releases 3rd October 2011
www.hcibooks.com
What's it about?
Privileged and popular Caleb Mason is celebrating his high school graduation when he receives a mysterious, disturbing letter from his long-lost childhood playmate, Christine. Caleb and his jokester friend Bean decide to travel to his tiny hometown of Hudsonville, Florida, to find her. Upon arrival, they discover the town has taken a horrifying turn for the worse. Caleb's childhood home is abandoned and his father has disappeared. Children are going missing. The old insane asylum has reopened, and Christine is locked inside. Her mother, a witch, is consumed with madness, and Christine's long-dead twin sister whispers clues to Caleb through the static of an a.m. radio. The terrifying prophesies of the spirits are coming to pass. Sixteen clocks are ticking; sixty-six murdered souls will bring about the end of the world. As Caleb peels back layer after layer of mystery, he uncovers a truth more horrible than anything he had imagined, a truth that could only be uttered by the lips of the dead.
My review:
5/5
I admit when I read the first page of this, I was skeptical. It's written so differently to anything I've ever read and I had trouble understanding what was going on. However once I got passed the prologue and the story started, it 'calmed down' a little and I got right into it, it's still written very uniquely but that just made it all the more interesting. And as soon as the mystery started I was desperate to get to the end and find out what was going on and stayed up later than I should have before forcing myself to put it down (I actually woke up still holding my Kindle up!).
The book is gripping and creepy with lots of action and is full of some wonderful, if odd, characters.
Our hero Caleb (Billy) is brave and caring and best friend Bean is hilarious, I loved the banter that goes on between the two friends even when things get scary. Though Caleb is the main hero I also loved another hero of the book Ron, he's been through a lot and is struggling with his faith, but he really steps up when it's asked of him and is also incredibly brave.
Though I found the end a teensy bit predicatable for me, it was an excellent read with some unique ideas and I'd recommend it to anyone.
There's a couple of loose strings which makes me think there will be a sequel... I certainly hope so!
Other books by J. Gabriel Gates:
Dark territory (The Tracks book one)
Ghost crown (The Tracks book two - Jan 2012)
Vist J. Gbariel Gates website.