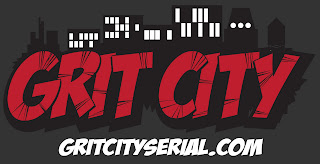 Grit City Emotobooks Revolutionize Fictional Storytelling
Ron Gavalik
As a writer it’s always been a goal of mine to bridge the gap between the cerebral gratifications of well-plotted writing and the visual stimulation of illustrative art or film. Like a mad scientist with crazy hair and a battered lab coat, I experimented with various styles, structures, and word painting exercises. Nothing seemed to achieve my goal.
Then it came to me. I had a mini-epiphany. Insert abstract, emotionally representative illustrations during peak moments of tension. By delivering a visual experience of what the character feels and experiences, the reader is more intensely immersed in the story.
The term emotobook is simply a portmanteau word I conjured, as a fun and memorable label for this new medium of fiction.
Unlike comic books that use direct illustrations as the primary storytelling device, Grit City emotobooks are written mystery noirs, with an urban fantasy twist. The four of five illustrations in each thirty-page installment merely lend a visual experience to the internal emotional processes of the characters.
It’s lots of fun.
Grit City is continuing story, published each month to Amazon, Barnes and noble and other eBook retailers. In each installment the reader is exposed to a dark and calamitous world, where the nefarious rule.
Our main character is Dillon Galway, an idealistic freelance journalist in his mid-twenties, who barely scrapes out a living reporting on corruption for the metro newspaper and his own blog.
Dillon embodies a double meaning of the term grit. He is a gritty individual, who drinks and lives meagerly. But he also possesses grit. Courage and strength of character are his dominant personality traits.
I’ve constructed a world where Dillon shares a symbiotic relationship with the city. Its failures have lowered him, yet he remains hopeful for the restoration of peace and opportunity. Occasionally, he relies on the sexy and sultry Alyssa Stephano (gun for hire) to help when situations require her nickel-plated Colt .45 revolvers.
Grit City was an ideal place to live at one time. We all know of towns that have fallen over the years. The murder of Dillon’s Father and the rise of the Syndicate started Dillon’s downward spiral. All meaningful power in business, politics, and law enforcement were funneled into the hands of this wealthy organization.
But in the shadows of the back alleys, whispers stir in the underground of an unnamed force. Something or someone that’s determined to upset the status quo. When Dillon is tipped about horrifying activities he’s propelled into a perilous investigation that may lead to dire consequences.
As the series progresses he’s faced with unfathomed challenges, but also gains abilities most consider impossible.
The creation of Grit City is a collaborative process. Jim Settnek is our illustrator and e-publishing layout master. It’s his years of experience that breathes life into the emotobook illustrations. Nikki Hopeman is our proofing editor. Her eye for detail ensures the story installments I write are held to the highest possible level of storytelling. Kunta is our web and electronic media guru, who likes to eat…a lot. We just feed him cookies and let him work his magic. Without this team my vision of emotobooks never would have existed.
With that said, we’ve all dedicated our lives to this pursuit. We’re thankful such a broad audience is heralding the story. It seems our tagline on the website is true.
Read one installment and you’ll be hooked until the gritty end.
_________________________________________________________________________
Grit city issue one is available to buy now, issue two is due for release August 1st
Check out the website,
And the Facebook page,
And tomorrow I'll be posting my review of Issue one.