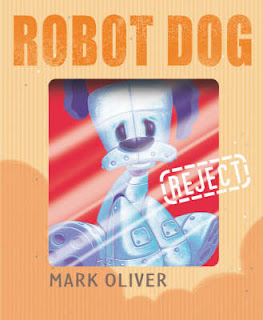 Robot dog by Mark Oliver
What's it about?
In a factory on a hill, a huge machine creates robot dogs for owners eager to feed and play with the lively creatures. But when Scrap dents his ear, he is exiled to the junkyard where all of the other rejected creatures live without someone to care for them. The yard is a comfortable place, but it is never quite the same as finding an owner. What can the rejected dogs do? All dogs, even robot dogs, want an owner.
Mine and Olivers review:
5/5
When I took Oliver to bed he wasn't interested in a story, he didn't want to go to bed, but as soon as I opened up this book he stopped! The pictures are lovely and colourful. The tale starts off sad when a poor robot dog is scraped because he has a dent. Though he's sad and doesn't quite understand what's going on he makes the most of it and makes new friends with the other scrapped dogs which I think is a great lesson fir kids. When the dogs get sad that other dogs they play with have an owner they make themselves an owner with the scrap metal in the junkyard to make for a happy ending. We thought this was a lovely book, it teaches kids to make the most of a bad situation and to be resourceful rather than to be jealous of what others have. The pictures are cute and colourful and the text is big enough for little fingers to follow.