Hi guys, I wanted to share with you some information about a great anthology that's raising money for a great cause. - Mist 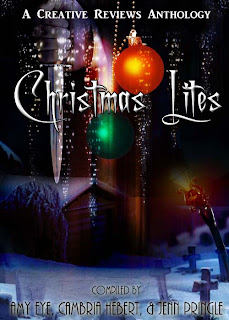 Once upon a time, a rough and tumble seven year old caught Santa sliding down the chimney…
Then a ninja elf came and broke Santa out, no net is strong enough to keep out this ninja elf! Off past the faithful family pet they ran and jumped in the sleigh. They raced to another house but refused to stop when ghosts were there to greet them. Santa doesn’t tangle with ghosts. He doesn’t tangle with vampires, either.
At the next stop, he met a runaway gingerbread man who yelled, “You can’t catch me, I’m the gingerbread man!” Santa didn’t bother to catch him; he had things to do.
On his way to his next delivery, he passed a werewolf jumping out of a plane and dodged a zombie hungry for his brain.
He finally touched down in a nice, normal town full of tidings and great joy…
Or did he?


Dive into a world of variety—a world of spirit with this Creative Reviews anthology. What better way to celebrate the holiday season than with some short stories that entertain and encompass the true meaning of Christmas? All proceeds of this book will be donated to the NCADV (national coalition against domestic violence). Debut authors and published authors have come together in this one-of-a-kind compilation – please help support a great cause and plunge deep into our imaginations.

National coalition against domestic violence.
http://www.ncadv.org/
Info of what they do:
NCADV believes violence against women and children results from the use of force or threat to achieve and maintain control over others in intimate relationships, and from societal abuse of power and domination in the forms of sexism, racism, homophobia, classism, anti-Semitism, able-bodyism, ageism and other oppressions. NCADV recognizes that the abuses of power in society foster battering by perpetuating conditions, which condone violence against women and children. Therefore, it is the mission of NCADV to work for major societal changes necessary to eliminate both personal and societal violence against all women and children.


NCADV's work includes coalition building at the local, state, regional and national levels; support for the provision of community-based, non-violent alternatives - such as safe home and shelter programs - for battered women and their children; public education and technical assistance; policy development and innovative legislation; focus on the leadership of NCADV's caucuses developed to represent the concerns of organizationally under represented groups; and efforts to eradicate social conditions which contribute to violence against women and children.