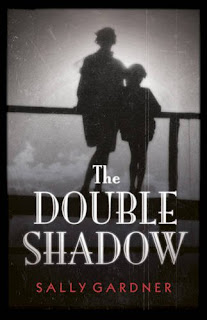 The double shadow by Sally Gardner

Introduction from the author.
The Double Shadow is a new kind of adventure novel - it's a Film Noir, Sci-fi family saga set against the backdrop of Second World War. It's about a man called Arnold Rueben who develops a memory machine as a gift for his troubled daughter Amaryllis - a machine where you can inhabit your past self and live out your memories again as if they were really happening. But only those that belong to our world have a double shadow, the rest are loop memories created by the machine. Amaryllis has to solve the riddle of her past and her present - who was her mother? And who is she in this place without time? What happened to her childhood? And who is really controlling the memory machine? It is also an epic love story.

How would you like to get your hands on a copy of the book?
Two lucky winners will win a hardback copy of The double shadow!
Deets
This giveaway is open to the UK ONLY, sorry international peeps.
Giveaway will end 27th November when two winners will be drawn randomly.
There is no requirement to follow or share, though it is appriciated so after your free entry please feel free to enter any of the extra entries (or none) that you like.
Winners will be notified via email so please make sure you enter with an address you check often.
﻿