Every other day - Review 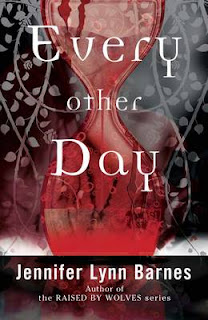 Every other day by Jennifer Lynn Barnes
Available now
http://www.quercusbooks.co.uk/

What's it about?
Every other day, Kali D'Angelo is a normal sixteen-year-old girl. She goes to public high school. She attends pep rallies. She's human.
And then every day in between . . .She's something else entirely.
Though she still looks like herself, every twenty-four hours predatory instincts take over and Kali becomes a feared demon-hunter with the undeniable urge to hunt, trap, and kill zombies, hellhounds, and other supernatural creatures. Kali has no idea why she is the way she is, but she gives in to instinct anyway. Even though the government considers it environmental terrorism.
When Kali notices a mark on the lower back of a popular girl at school, she knows instantly that the girl is marked for death by one of these creatures. Kali has twenty-four hours to save her and, unfortunately, she'll have to do it as a human. With the help of a few new friends, Kali takes a risk that her human body might not survive. . .and learns the secrets of her mysterious condition in the process.

This book was full of excitement and adventure and had me hooked from the get go with it's action and laugh out loud witty, sarcasm. I really enjoyed entering into the world that Jennifer Lynn Barnes has created and she's put such a great new twist on an old thing that I literally didn't see it coming.
When I started to realise that the book was predominately set during just one day I wondered if the author really could pull something like that off as believable but I needed have worried, the time flow was done really well and because of Kali's inhuman abilities it was feasible that this action packed advenure could've taken place in one day.
I loved all of the monsters, old and new, used in the book and the imagination used to create them.
Kali was a wonderful, complex character, she has a hero complex but at least she knows it, she wants to be human but when she's human it kills her she doesn't have the abilties to help people, she really is at war with what she is, but she kicks butt either way.
I also really liked sweet Skylar and (not so) bitchy queen bee Bethany and the unlikely friendship the three of them reluctantly make as they take on this adventure and start to unravel secrets and find answers. All three of them have their talents and it's really a group effort that brings them to the conclusion, which also was pretty awesome, with plenty of violence and twists.
I'd recommend this to any fans of action books with kick ass heroines.

My thoughts on the cover
I like every element of this cover but all put together there's to much going on, the hourglass is really pretty but the grey vines take away from it a little and I'm not sure what's going on in the backgroud, I do like the font and the colours though and it is a nice cover :)

'I wasn't planning on waiting for the creature to die from the poison, though. It couldn't move. It couldn't fight back. Might as well cut off it's head.'
'That was when I lost myself to the moment, the weapons, the fight. There was a rhythm to it, unbreakable and swift. I felt like I was dancing. It rained blood.'

Email ThisBlogThis!Share to TwitterShare to FacebookShare to Pinterest
Tags: every other day, jennifer lynn barnes, review