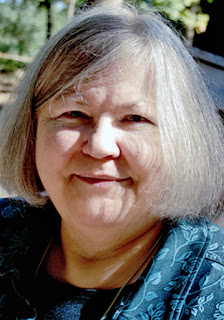 My thanks to the ever-gracious Mist and Ninfa for inviting me to talk with you, the readers of Bookaholics Book Club.

Friends, let’s set the scene for our get-together. I’ll take the lumpy chair and you can have the sofa. Squeeze up there a bit, there are a lot of you. Mist comes around with tea. I inhale the steam rising from my cup, which not only clears my head but my sinuses too.


Merriam-Webster’s primary definition says that a demon is:
1 a : an evil spirit
b : a source or agent of evil, harm, distress, or ruin
Fairly general, right? I’ve known bosses who definitely fall under b, possibly even a.


The Mortal Path books are based on Sumerian mythology, and that includes the concept of demons. In contemporary Christianity, demons are usually considered to be fallen angels. Not so in earlier times, when demons were associated with a specific disease or other bad outcome for a person.


For example, the ancient Hebrews believed that if you left a jug of water uncovered at night, a demon of blindness would settle on it, and anyone who drank the water in the morning would become blind. I think beliefs like this come about because someone in a village noticed a pattern; three people drank from uncovered water containers and later became blind. The water may have had nothing to do with it, or everything to do with it if there were parasites or bacteria in it. The people had noticed cause and effect, but couldn’t explain what happened between the two. Must be a demon at work.


The Sumerians had a whole raft of demons for all kinds of diseases. The ones from their mythology that I’ve chosen to use have a particularly charming set of attributes. They are:


In the Mortal Path books, these demons are still alive thousands of years after the Sumerian civilization is gone, and they play an active role in our current time. A nasty active role, since I’ve generalized them into being responsible for the things that plague our global society: war, disease, chaos, destruction, you name it. The things that keep humanity from becoming all it can be, like weights around our collective ankles.


Maliha Crayne, trying to redeem her soul that she sold to Rabishu, also has a bigger goal in mind. She wants to destroy all of the demons and free Earth of their influence. She has to collect seven shards (one for each demon) of a massive diamond to do it. When she has all seven, they will glom together to form a lens. With the lens, she can read a tablet that lists the weaknesses of each of the demons, allows her to gain control over them, and then she can destroy them. The demons aren’t taking this lying down, though, so she has a fight on her hands.


This is heading into some deep stuff. Are we flawed humans meant to be without our tormentors (demons) on Earth? Do we, and Maliha in particular, have the strength and freedom of will to accomplish that? What would such a world be like? Take away outside influences that have been pushing us in the direction of war, hatred and fear, and give us paradise on Earth—a chance for humanity to blossom beyond our current limited dreams. Would we then muck it up on our own? Stay tuned. To paraphrase Buzz Lightyear, “To Deliverance ... and beyond!”

Now a quick passage from Deliverance (not the opening).

When Amaro arrived at Maliha’s public condo, she was wearing a white uniform, soaked with sweat, and using two swords. She was doing lunges to skewer an invisible opponent and fierce swings that sent an invisible head flying across the room. Items from the kitchen cabinets had been lined up on a counter and systematically destroyed as though someone had taken a chainsaw to them. She’d been practicing with her whip sword, a deadly weapon she wore coiled in a sheath around her waist. The whip sword had two long, flexible blades that an expert user could snap and swing at terrific speeds, severing limbs or whatever else was in the way. It was a vicious weapon and she used it with great skill.
“Okay, I can see you’re seriously pissed,” Amaro said. “Tell me about it.”
His voice broke into her trance. She stopped and lowered the swords to the floor, making sure she caused him no injury. Amaro moved closer.
“Seeing you like that was kind of scary,” he said.
“So is what’s in that envelope.” She nodded her head in the direction of the packet on the
counter. 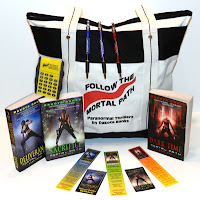 Want to win this fabulous swag bag? Check out the details then fill in the form: