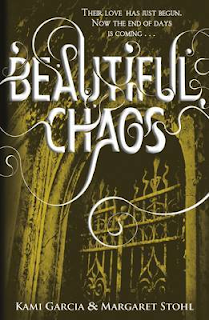 Beautiful chaos by Kami Garcia and Margaret Stohl
Available now
www.penguin.co.uk
What's it about?
Ethan Wate thought he was getting used to the strange, impossible events happening in Gatlin, his small Southern town. But now that Ethan and Lena have returned home, strange and impossible have taken on new meanings. Swarms of locusts, record-breaking heat, and devastating storms ravage Gatlin as Ethan and Lena struggle to understand the impact of Lena's Claiming. Even Lena's family of powerful Supernaturals is affected - and their abilities begin to dangerously misfire. As time passes, one question becomes clear: What - or who - will need to be sacrificed to save Gatlin?
For Ethan, the chaos is a frightening but welcome distraction. He's being haunted in his dreams again, but this time it isn't by Lena - and whatever is haunting him is following him out of his dreams and into his everyday life. Even worse, Ethan is gradually losing pieces of himself - forgetting names, phone numbers, even memories. He doesn't know why, and most days he's too afraid to ask.
Sometimes there isn't just one answer or one choice. Sometimes there's no going back. And this time there won't be a happy ending.

If you haven't read the first two books then there be spoilers ahoy﻿
I'll start by saying I really loved the first book in this series 'Beautiful creatures' and, aside from the first 100 pages, I loved the second book 'Beautiful darkness' so I feel bad admitting I felt slightly disappointed with this third installment, but I can't figure out why to be honest, I think maybe it's because now that we're up the third book I expected it to pick up the pace a little, perhaps have a little more action, this one just felt very 'same' to the others, the story is still fresh, it's more the formula of the book that felt the same. I did enjoy the book and I liked the story but I wasn't excited by it, I found that I could put it down and go to sleep at bed time, something I couldn't do with the first two.
I still love Ethan though, I've read a few books with male leads now and he's still my favourite, and I don't mean because he's hot, he's way to young for me lol but he's a natural southern gentleman and he's just so caring and good to Lena, they're also one of my favourite lit couples.
I also really loved Link is this one, I've always enjoyed his friendship with Ethan but he's really starting to come out as his own character now and he's also really funny.
So, to conclude, whilst I wasn't glued to this one I did enjoy it and the ending was killer! I'm excited for the next book in The Caster chronicles and hopeful that the pace will pick up.

My thoughts on the cover
What I do like about these covers are that they aren't another girl-on-the-cover set, they're different but at the same time they're a little boring, I do like the yellow and the great font which is actually raised and shiny silver so it really stands out from the crowd.

The hallway in front of them as an ex-siren and a quarter incubus conquered Jackson High. I wondered what Amma would have to say about that.
Sweet baby in a manger. Heaven help us all. - Ethan
I had always hoped things would change in my town, until they started changing. Now I wanted Gatlin to go back to the boring town I'd known all my life. The way things were when I hated the way things were. Back when I could see things coming, and nothing ever came.
I didn't want to see this - Ethan
Website for the books and authors
Kami Garcia's website
Kami Garcia on Facebook
Kami Garcia on Twitter
Margaret Stohl's website
Margaret Stohl on Facebook
Margaret Stohl on Twitter