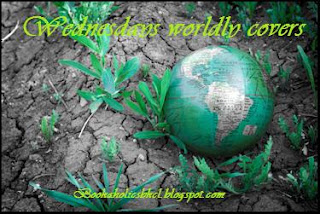 Wednesdays worldly covers is an original feature I made up, each week I share a book cover from around the world. 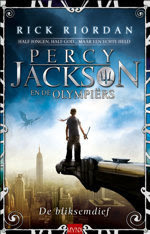 This is the Dutch cover for De Bliksemdief (The lightening thief) by Rick Riordan, or otherwise known as Percy Jackson and the lightening thief.
Mist: I do like this cover but I think it gives the book an older feel than it's aimed at. The colours though are appealing and I like the dragon (or Pegasus?) in the distance.
Ninfa: This cover is a little too futuristic for me and it doesn't quite match the feel of the book, which I've read and loved.
I don't get why Percy is standing on a sort of eagle head on a building either...a little off for me and I just don't seem to love it. 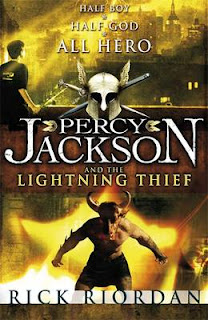 And here of course is the UK cover.
Mist: This one I prefer I think, I like the yellow, it stands out and I love the Minotaur, I think this appeals more to young heros :)
Ninfa: The UK version is very heroic and it makes me think of myths and legends and really encopassing the theme of the book. I love the metallic colours and the font of the title. A good cover that appeals easily to both teenagers and those of us who've left those years behind. 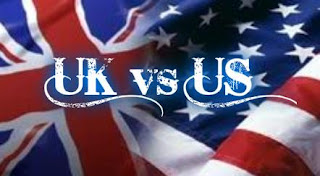 UK vs US is a feature done by a lot of blogs but I don't know where it originated.
Each a UK cover and a US cover of the same book battle it out.
Between by Jessica Warman.
Mist: I really like both of these covers for different reasons, I love the colours in the UK cover but I like the creepy feel that tells me that this is perhaps on ghost story on the US cover. I don't like the drunken font on the US cover though. I think I prefer the UK cover overall, it's easier on the eye even if it doesn't tell me what the book is about lol.
Ninfa: Really love the US cover. I like the way the girl has her feet in the clouds and how the ground is above her head,makes me think about the story and what exactly is going on with the girl...I haven't seen or read anything about it but it kinda makes me guess it's about the afterlife and makes me curious about the story. A really pretty cover.
The UK one is okay as well,but less intriguing for me, though the girl looks dead to me which makes it a little creepy...
...it's a US win for me on this one :)
Which do you prefer?