Warriors of the edge review 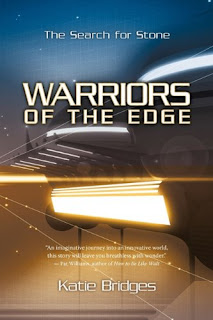 My review:
4/5
I originally saw a call-out for people interested in reviewing this book on Reads, reviews, recommends and decided to put my name down and I'm glad now that I did because I really enjoyed it.
In this book Earth has been made unliveable and humans now live on twelve man-made planets in different dimensions in a society much more technologically advanced than our own, something that would involve quite a lot of world building, right? The author does a great job of setting up the scenes and the world and doesn't confuse or bore the reader by spending a long time with descriptions and info dumps, I could really imagine this new world and what it would be like to live there.
I found all the characters likeable to, Tarek is a dreamer, more cut out for fast paced action rather than sitting in a class room and I really enjoyed his friendship with Masker. I found his sister Tustley to be really intriguing and think there will be more of her in the future which I'm looking forward to see.
I found the concept of the game to be really interesting to and how it bleeds into real life, distorting the lines of reality, no one quite knows how the game came to be and I know I'm desperate to find out more, whilst the story ended well there's still lots of mystery left to keep me interested and waiting for the next one.
It was an easy read that left me thinking about the future and what's in store for us.

My thoughts on the cover:
It took me a while to figure out the cover image, you really have to read the book to find out what it is but now I know I think it's a great insight into that particular desription. I do like this cover, it picks up the futuristic, sci-fi tone of the book.

'Butterfly threw up her chin and crossed her arms as elegantly as she could, in order to convey that she was most displeased with Clueless in the politest way possible.'
'With summer passing into fall, Tarek was beginning to wonder if he'd ever find out what it meant to be Stone.'
Katie Bridges' website
Katie Bridges on Facebook
Katie Bridges on Twitter

Email ThisBlogThis!Share to TwitterShare to FacebookShare to Pinterest
Tags: katie bridges, review, search for stone, warriors of the edge