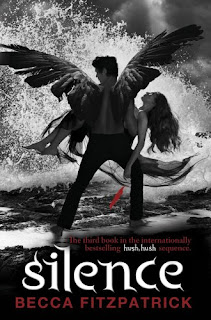 Silence by Becca Fitzpatrick
Available now.
What's it about?
The noise between Patch and Nora is gone. They've overcome the secrets riddled in Patch's dark past...bridged two irreconcilable worlds...faced heart-wrenching tests of betrayal, loyalty and trust...and all for a love that will transcend the boundary between heaven and earth. Armed with nothing but their absolute faith in one another, Patch and Nora enter a desperate fight to stop a villain who holds the power to shatter everything they've worked for—and their love—forever.
My review
4/5
I haven't written reviews for the other two books because I read them before I was blogging so I'll start by telling you I really liked Hush, Hush although I was never a Patch fan and I liked Crescendo but I still wasn't a Patch fan and also went off Nora but I still love the story and was eager to get to this third installment and have to say it's my favourite of the series so far, Patch seems to have lost his arrogance and penchant for secrecy which made me able to really like his character and Nora wasn't so - for lack of a better term - whiny. She's been through a lot and is starting to grow up and although she does still have a short temper she asks the right questions more often so I didn't get frustrated with her like I did with Crescendo.
The first half of the book did move a little slow as we rehashed over the events of previous books but after that it did move at a good steady pace and made for an enjoyable read. I really feel Beccas writing has matured along with her characters which made for some really beautiful descriptions and I was really immersed in the book and after the ending I'm really excited to see where book four will take us.

Spoiler waning: Stop if you haven't read Hush, Hush.﻿
I have to say though, I'm struggling to see the rebels as the bad guys, whilst the way they're going about things is wrong, I can't blame them for not wanting their bodies possessed for two weeks of the year and since some fallen angels force them to swear the oath it makes it even harder for me to be on their side like Nora seems to be. That being said I have some high hopes for Nora in the next book and would love to see her kicking butt and taking names!

My thoughts on the cover
I think everyone loves these covers, how can you not, this picture alone is stunning, the real shiny life version is even better, the books decorate my shelves really well lol Can't wait to see if they can top them with the next one.