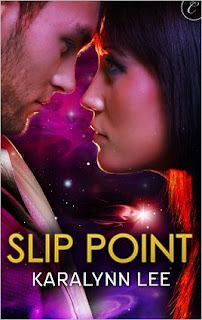 Slip point by Karalynn Lee
Available now (only on Kindle)
Carina press
What's it about?
﻿From childhood, Shay had one dream—to join the Space Corps with her best friend and sweetheart, Jayce. When the Space Corps reveals that the father she thought was dead is actually an infamous pirate and rejects her application, the dream dies and she leaves the planet without saying a word to Jayce.
Ten years later, Shay is a pirate herself. She captains her own ship and has earned a reputation as one of the slipperiest pilots around. That's why she's recruited for a dangerous secret government mission. But the cargo she's assigned to smuggle turns out to be a woman with a government bodyguard—Jayce.
Jayce never thought he'd see Shay again, and when the mission forces them together on her ship, he isn't sure he can forgive her for deserting him; but their desire for each other is stronger than ever. Jayce knows he wants to be with Shay, but how can he trust a woman who's both a pirate and the girl who broke his heart?

My review
4/5
The first description that comes to mind when I think of Slip point is that it's Star wars for girls, it's set in space, has cool space crafts, confusing politics, aliens and some steamy romance.
This was a really great short read set in a great world I enjoyed being in, right from the start the author sets a great futuristic scene and gives off an idea of her world without it feeling like a big info dump. I really liked both the characters of Shay and Jayce and the chemistry between them is undeniable, both when they are younger and when they are reunited. I found it really interesting that she was a pirate with morals, she dreamed so much of captaining her own ship she was willing to most anything to acheive her dream even if it went against her ethics, but in the end she does the right thing.
I did, however, feel that parts of the story were rushed, I think it would've made for a very exciting full length novel rather than as a novella, but that's just my opinion of course, it was still enjoyable and easy to fall into.
I was a little confused about the politics a couple of times but I still managed to follow the main story and the surprising twists that enfolded in Shays journey across the galaxy.

My thoughts on the cover
Love it! The colours, the planet, the pretty couple, what's not to love, it really gives the sci-fi feel of the book and the romance.


Sorry, no favourite quotes, I read an egalley and don't have a final version to compare with to make sure they're still in it.﻿