Welcome! Thanks for joining the celebration of the release of The Sands Of Time. I only sent out one ARC to one reviewer this time around as ARCs are something I'm experimenting with. (I also think she may have pulled my arms and legs off if I didn't send her the book as soon as I possibly could.) You can read the very first review, by the lovely Ninfa here.
I thought I'd centre my blog post on writing about relationships. I call myself a romance writer because I love writing relationships, although, in truth, I don't actually know if that makes me a romance writer – you see, I'm not led by the romance, but by the characters. Some people would consider me an erotic romance writer, because I like those relationships to be hot, but this is also not necessarily true. It's only as hot as the characters allow (and yeah, a lot of my characters allow for that). I'm learning, as time goes on, that to be true to the relationships of my characters, I have to break some rules of what the romance genre expects. So I may not be a romance writer at all…
I get bored easily. I'm lucky, because my significant other has about ten different personalities and they all keep me amused. I look for the same in books. I like to read and write about the differences between all my characters and how they relate to each other.
In The Witching Pen Novellas, we have at least three examples of emotional / sexual relationships: there's Karl and Elena in book one – they're the sweet ones – best friends who have always loved each other, and although there's definitely passion there, there's also a gentleness that is unique to them, as well as that unbreakable 'soulmate' bond. Pueblo and Amy, in book two, have a more lustful arrangement, not least because of their blood bond and other elements that come to light. In book two, we also get a hint of what Gwain and Mary's situation will bloom into. It's only a hint – and the keyword is 'intensity'. They both have a deep need that stretches back aeons, and that's all I'm going to say about that for the moment.
But these books are also about all relationships, not just romantic ones (and this is the part where I question if I'm really a romance writer). Pueblo has a world of hurt placed on his shoulders from his tribe, so how does he relate to others? Gwain has some kind of history with Elena's mother – what does that mean to Elena? He's also the closest thing that Karl has to an angelic 'tutor' – we could go so far as to say that he fathered / midwifed Karl into his angelic life – so what does that mean to Karl? I'm not even going to go into Amy's complications… But these are all important key points that affect the characters' relationships with each other, and more importantly, it's what bonds them all together and makes the story come alive (or at least, that's what makes the story for me).
The 'romance' is always there. Each book focuses on two characters' emotional romantic development, but it does not leave the other characters behind – they continue to develop as well, and we see that in spades. It's entirely possible for me to explore two couple's relationships in one book (although one will always take centre stage over the other), because life is all about cross-overs and how people meet and relate. From what I understand, this is a big no-no in romance. Maybe what I write about is life (supernaturally, of course) – it's just that for me, life has always been synonymous with matters of the heart and more often than not, that means relationships.
Am I a romance writer? You decide, because I can't – and when you figure it out, please let me know ;)
So what am I leaving you with? (Grins…) I'm leaving you with the blurb for book three, The Demon Bride (below), as well the link to the now up and running site for The Last Angel, where you'll also get to see the book cover prototype. The Last Angel will be a spin-off, full-length novel to The Witching Pen Novellas. Oh yeah … and I have GIVEAWAYS! Read on… 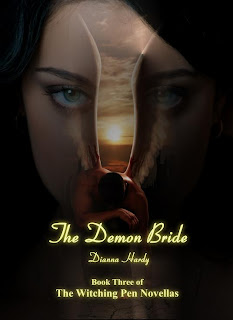 "Two thousand and eleven years after the birth of the Failed One, the Witching Pen will be made manifest on Earth by the Great Shanka Witch of the Old Scrolls. By her hand, the earth will rumble and shatter, and all dimensions will bleed into one."
The true purpose of the Witching Pen has been revealed, and it must be destroyed before an apocalyptic prophecy comes true. There's just one problem – the Pen is indestructible.
As everyone searches for much needed answers, Elena lays down plans for a radical mission to save her mother, Katherine, from the Shanka's shadow world.

Meanwhile, Mary has finally discovered who she really is, and
what that means for the human race. Almost more disturbing, is her growing dependency on Gwain to relieve the excruciating pain her nightmares inflict upon her – nightmares which have started to inhabit her waking hours.
While Elena, Karl, Amy and Pueblo enter the Shanka dimension to retrieve Elena's mother; Gwain searches for a way to save both Mary and mankind ... and comes to a startling conclusion.

Released Summer, 2012, this is the final instalment of The Witching Pen Novellas, but will give way to a full-length, spin-off novel, called The Last Angel. I can't give you much information on that yet, but expect an Earth-shattering conclusion to everything that's happened so far! You can catch a glimpse of the tone of the novel at http://www.thelastangel.co.uk/ where I'll also be posting updates as and when.